“The world is warming not only because fossil fuels are being burned, but also because soils, forests and wetlands are being ravaged. In recent years, some scientists have begun to ask whether we can put some of that carbon back into the soil and into living ecosystems, like grasslands and forests. This notion, known as carbon farming, has gained traction as it becomes clear that simply reducing emissions will not sufficiently limit global warming.” 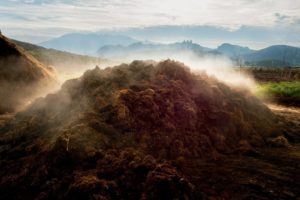 “Carbon farming’s fundamental conceit is that if we change how we treat this land, we could turn huge areas of the earth’s surface into a carbon sponge. Instead of relying solely on technology to remove greenhouse gases from the air, we could harness an ancient and natural process, photosynthesis, to pump carbon into what’s called the pedosphere, the thin skin of living soil at the earth’s surface. If adopted widely enough, such practices could, in theory, begin to remove billions of tons of carbon dioxide from the atmosphere, nudging us toward a less perilous climate trajectory than our current one.”

“In a 2016 paper, Pete Smith, a soil scientist at the University of Aberdeen in Scotland, and the influential climate scientist James Hansen argued that land-management practices are one of the few affordable options available today for drawing down carbon. “What’s surprising to me is that we’ve not done it sooner,” says Smith, who is also a lead author on a recent U.N. report that explores carbon-dioxide-removal technologies. “This has the potential to make a huge difference.”