“Many fertilizers contain ammonia, which is produced from nitrogen (necessary for plant growth) and hydrogen using a chemical reaction called the Haber-Bosch process. This process revolutionized agriculture in the early 20th century by making mass production of fertilizer possible. However, the process yields hundreds of millions of metric tons of carbon dioxide each year.
‘Ideally, we want a fertilizer that’s renewable,’ Reuter says. And to make it truly green, it should be created at the farm, making transport, another carbon emitter, unnecessary. Reuter and a growing number of chemists, physicists and engineers think they can see how to make that happen. These researchers are working toward future farms that are truly sustainable, where the energy from renewable sources like wind or solar is harnessed to make an efficient fertilizer on-site. They hope to realize this vision by exploiting plasma.”
https://www.sciencenews.org/article/cold-plasma-agriculture-sustainable-farms-fertilizer

“Soil is the most important answer to climate change, and also one of the most underappreciated. Without soil, we have no food…The positive news is that we can work on our soil integrity right now to preserve it for many future generations to come—you might be surprised that using regeneratively raised cattle is part of that solution.” 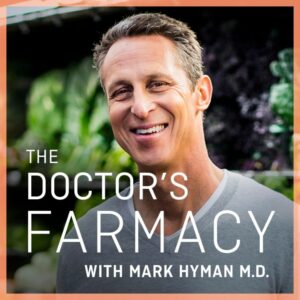 “Those that are laser-focused on clean food and a better environment believe regenerative agriculture will not only result in healthier food, but could become a significant factor in reversing the dangerous effects of manmade climate change. This centers on the idea that healthy soils anchor a healthy planet: They contain more carbon than all above-ground vegetation and regulate emissions of carbon dioxide and other greenhouse gases.” 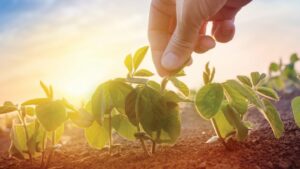 True regenerative organic agriculture can improve the environment, the communities, the economy, even the human spirit,’ says Diana Martin, director of communications for the Rodale Institute, in Kutztown, Pennsylvania. Rodale, a leader in the organic movement, has been carrying the global torch for regenerative agriculture since the 1970s, when Bob Rodale, son of the institute’s founder, first began talking about it. ‘He said sustainability isn’t good enough. In the U.S., we are depleting our topsoil 10 times faster than we are replenishing it. We only have 60 years of farmable topsoil remaining,’ says Martin. 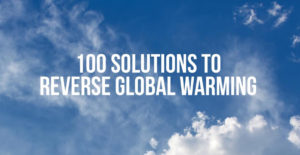 “The Food Sector includes agricultural production (crops and livestock) as well as food preparation, consumption, and waste. This essential human activity is responsible for a major share of greenhouse gas emissions today: crop and livestock production is the source of about 1/8 of anthropogenic emissions. Land clearing (which is mostly for agriculture) is the source of another 1/8 of emissions (IPCC, 2014). Many of Project Drawdown’s supply-side agricultural solutions reduce emissions from farming and ranching, while also sequestering significant amounts of carbon.” 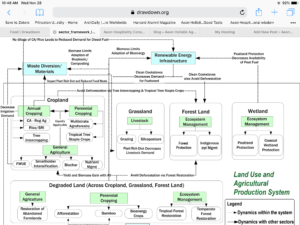 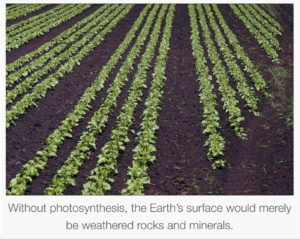 Our role, in the community of living things of which we are part, is to ensure that the way we manage green plants results in as much light energy as possible being transferred to — and maintained in — the soil battery as stable soil carbon. Increasing the level of soil carbon improves farm productivity, restores landscape function, reduces the impact of anthropogenic emissions, and increases resilience to climatic variability.

It is not so much a matter of how much carbon can be sequestered by any particular method in any particular place, but rather how much soil is sequestering carbon. If all agricultural, garden, and public lands were a net sink for carbon, we could easily reduce enough CO2 to counter emissions from the burning of fossil fuels.

Everyone benefits when soils are a net carbon sink. Through our food choices and farming and gardening practices we all have the opportunity to influence how soil is managed. Profitable agriculture, nutrient-dense food, clean water, and vibrant communities can be ours… if that is what we choose.

“Two thirds of the earth is now in the process of turning into desert. In the satellite photo above, the green areas are moist year round. The tan areas are turning to desert, and this process has been a larger source of climate change than fossil fuels. So this is a problem that must be solved, and soon.” 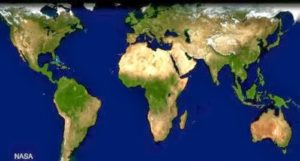 “…A basic evolutionary fact has been staring scientists in the face all along. These tan-colored places are (or were) mostly grasslands. And what do you always find on grasslands? Large, hoofed animals grazing on the grass — buffalo, zebra, gazelles, wildebeest, etc. The grass and the animals evolved together, much like bees and flowering plants. They evolved to rely on each other. They developed characteristics that are adapted to each other.
“So if you take away the grass, the hoofed animals die off. And if you take away the hoofed animals, the grassland turns into a desert.l”

“…Domesticated animals made the land turn into desert. But leaving the land alone also made it turn into desert. The biologist Allan Savory has done more to solve this puzzle than any other scientist. The answer was surprising to everyone involved. It didn’t really matter which animals were grazing. The key was HOW the animals were grazing. If the hoofed animals graze in a particular way, the grass grows and the deserts turn back into rich grassland. If they graze in any other way, or don’t graze at all, the land turns into a desert.”

“Savory’s discovery is this: For grasslands to be healthy they require herds of hoofed animals to graze on it. But they must graze in a natural way, which means: 1) all bunched up as grazing animals do (for safety in numbers — safety from predators), 2) never staying in the same spot for very long, and 3) not coming back to that spot for a while (which allows the grass to grow). If you graze the animals that way, it doesn’t matter which hoofed animals are doing the grazing — wild or domestic, or both — the grass begins to thrive.”