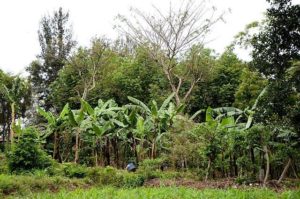 ”Agroforestry is essentially a forest-mimicking agriculture that involves growing trees, shrubs and vegetables in tight assemblages. It is an ancient technology created by indigenous peoples and popularized in recent decades by newer landowners. Although it’s difficult to pin down how much of the world’s agricultural land contains tree cover, figures range from 100 million hectares to as much as 1 billion hectares, which lock up an estimated .75 gigatons of carbon per year. By comparison, there were 32.5 gigatons of global carbon emissions in 2017.